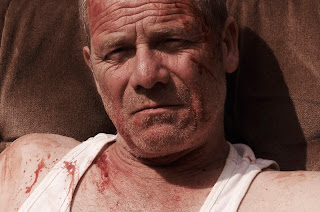 The Beast Within
by Mark Dispenza
The terrible consequences of uncontrolled rage and abuse are presented in vivid detail in Tyrannosaur, British actor Paddy Considine's debut feature as writer-director.

Not since Lee Tomahori's brilliant depiction of domestic violence within New Zealand's Maori community in Once Were Warriors has a film so effectively captured the complex emotional interplay of perpetrator and victim that is a universal human experience transcendent of culture.  This is an impressive debut behind the camera for an actor who has achieved considerable international acclaim for his roles in films such as In America, Cinderella Man and The Bourne Ultimatum.

Actor Peter Mullan captures both the horror and the humanity of Joseph, a self-destructive man prone to outbursts of cruelty and violence.  On the run following an altercation in a bar, during which he severely beats a young man, Joseph ducks into a Christian charity shop managed by Hannah, played by Olivia Colman.

Despite his obvious ferocity, Hannah reaches out to Joseph and offers to help him.  In typical fashion Joseph cruelly rebuffs her, but later he finds himself drawn to her and returns.  Perhaps it's her apparent lack of fear despite her own vulnerability, or perhaps it's her simple act of kindness that draws him.  But soon enough it's revealed that there is another dynamic in play here. 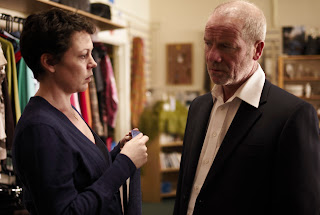 Olivia Colman and Peter Mullan
Hannah lives in terror of returning home every evening to her abusive husband, James (Eddie Marsan).  As her meetings with Joseph become more frequent, Hannah is unable to hide the scars and black eyes James inflicts on her.  Her encounter with Joseph was fortuitous, as both of them have reached rock bottom and resolved to conquer their demons.  As they draw ever closer, they discover that there is no greater tormentor than the one that lies within themselves.
Be warned that this is not an easy film to watch, as its depiction of cruelty and violence is raw and unflinching.  In the first minute of the film, Joseph beats to death his faithful dog for the simple act of barking too loudly.  One may grow to sympathize with Joseph and root for him to find salvation with Hannah, but the film never allows us to forget the terrible cruelty he has inflicted on others, and hints at even worse atrocities in his past, particularly those against his beloved and now deceased wife.
Ultimately this is a story about the trans-formative power of love and its ability to tame even the most terrible of beasts.
Tyrannosaur won a World Cinema Directing Award for Considine at Sundance and Special Jury Prizes for actors Mullan and Colman.  It went into limited release in the USA on November 20.
Posted by Mark Dispenza at 9:04 AM