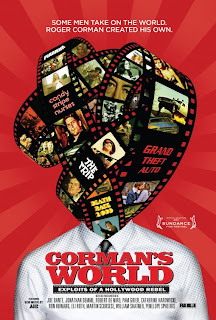 After over sixty years and almost four hundred films, Roger Corman may be one of the most influential filmmakers to grace the silver screen. But it isn’t necessarily his own films that have given him the title. Nor is it the honorary Oscar bestowed upon him in 2009 by the Academy. Instead, it is the countless filmmakers and stars that he has had a hand in influencing over his long career.

In Alex Stapleton’s documentary, Corman’s World: Exploits of a Hollywood Rebel, the filmmaker’s prolific career is remembered by those who he helped give their first big break in Tinsletown. Martin Scorsese waxes poetic about Boxcar Bertha from his state of the art screening room. Ron Howard recounts his experiences with Grand Theft Auto while taking a casual stroll. Peter Bogdanovich, who got his start in Corman’s exploitation films The Wild Angels and The Trip, claims the filmmaker was always ahead of the curve. But it is the intimate interview with Jack Nicholson, hired by Roger when no one else would cast him, that shows the most heart, even bringing the A-list actor to tears.

While many of these filmmakers and actors went on to bigger, and many would say better projects over the years, one must wonder why Roger never achieved the critical acclaim of his peers. The film touches on the subject of his passion for film, and one of the most ambitious projects of his career, The Intruder. Shot in 1962 and starring a young William Shatner, The Intruder dealt with the racial tensions of the South at the beginning of desegregation in the school system. But the film was a failure at the box office, and one of the only films Roger claims to have ever lost money on in his long-standing career. If it had been a success, who knows what trajectory Corman’s career would have taken, but he quickly settled back into his B-film shtick. 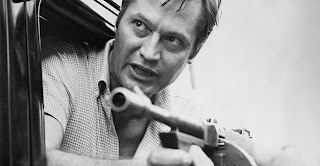 Through Roger’s career, the many shifts and changes of the industry are well documented. From the campy sci-fi films of the 50s, to the exploitation flicks of the 60s and 70s, followed by the summer blockbuster taking over the multiplex in the late 70s and early 80s, Roger found a way to succeed and persevere. When filmmakers like Antonioni and Fellini could no longer find American distributors, Corman’s New World Pictures stepped in to give them domestic distribution.

The quality of his films may have never given him the respect he deserves, but those who were influenced by his indie sensibilities have entertained us many times over. Those who currently work with Roger on his latest SyFy opus may end up becoming the next Scorsese or De Niro, so I plead to you Mr. Corman, never stop making films.