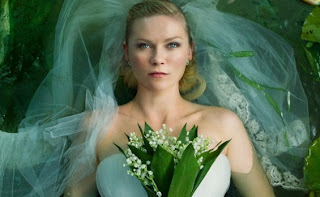 A GUIDED TOUR OF THE DARK SIDE
by Mark Dispenza

Incredibly beautiful and cinematic, Melancholia is an allegorical tale about depression by a filmmaker who suffers from the disease. However, before I go any further I must offer a disclaimer, because this film is not for everyone.

Lars von Trier is a genius, but his bouts with depression are legend, and they inform the subject matter of his films across the board (Antichrist, Dancer in the Dark, Dogville).  That is why his work will remain confined to art houses, and that's why his big, undisciplined mouth will continue to create headlines that overshadow the brilliance of his work.  Melancholia was a favorite challenger to The Tree of Life for the Cannes Palme d'or this year until von Trier made a flippant, smartass remark in a press conference that was interpreted to mean he's a serious admirer of Adolf Hitler. That got him negative headlines and banned from the festival.

I haven't talked to anyone who is lukewarm about Melancholia.  They either love the film or hate it passionately, and those feelings are duplicated across the board in the critical reviews.  One woman who attended a screening at the New Orleans Film Festival tweeted afterward that "Melancholia was two hours and fifteen minutes of escalating tension I could have done without."

People who MUST SEE this film: artists who don't suffer from depression (doesn't leave many of you, does it?), fans of surrealism, true cinemaphiles, fans of von Trier, people who study the science of the human mind, wedding planners.

People who SHOULD NOT SEE this film:  astronomers, anyone who suffers from clinical depression, teens with an IQ less than genius, people who want to see a "feel good" film, science fiction fans who are expecting an apocalyptic disaster movie that follows genre rules, fathers who are about to pay for their daughter's wedding. 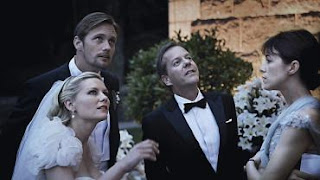 Kirsten Dunst, Alexander Skarsgard, Kiefer Sutherland & Charlotte Gainsbourg
If you do see Melancholia, you absolutely should see it on the big screen. This is the most beautiful film I've seen in a long time.  If you are a fan of surrealism like me, the opening sequence alone will make you giddy.  Kirsten Dunst plays Justine, a young woman who has issues.  She professes to have premonitions of the future, and the film opens with one.  Justine experiences the end of her life and everyone she loves as a giant planet collides with the Earth and swallows it.

It is the day of Justine's wedding, and we are introduced to her as a happy bride on the way to her wedding reception with the perfect groom, Michael (Alexander Skarsgard).  It is a bright sunny day, and her storybook wedding is taking place at a lavish resort.  Yet everything is not as perfect as it appears.  We soon learn that they are two hours late to their own wedding party, and those guests who are not having a wonderful, inebriated time are getting very upset.

Particularly angry are her sister, Claire (Charlotte Gainsbourg), and Claire's wealthy husband, John (Kiefer Sutherland), who Claire has convinced to shell out more money than the collective income of an entire city on this wedding of the century.

As the wedding party goes on late into the night, Justine's depression kicks in and the perfect wedding shatters like a broken mirror.  Udo Kier provides comic relief as the wedding planner who watches helplessly as his masterpiece is systematically destroyed by the ultimate Bridezilla.  "She has ruined my wedding.  I will not look at her."

By the time the evening is over, Justine's wedding party, her storybook marriage and all of her relationships, except for the long-suffering Claire, lie in shambles. 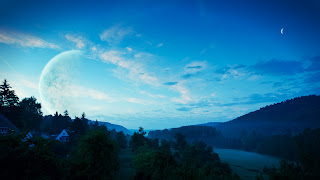 But something else has intruded on their world.  A giant planet called Melancholia has emerged from behind the sun and taken off on a collision course with the Earth.  Can you imagine anything more allegorical than a huge threat that hides behind the sun and is named after a term for clinical depression?  For those of you that took this seriously and judged the film based on real world science, I implore, "get a grip."

As Melancholia looms larger in the sky, Justine watches her rock, Claire, begin to panic and deteriorate into anxiety.  Her husband John's faith in the precision of science has betrayed him, and there is nothing they can do about it.  On the other hand, Justine becomes the calm center of reason.  After all, she knew this was coming.  She was proved right, and Claire might as well accept their unavoidable fate.

I wish I could share with you the final scene of the film, but I don't want to break my own rule of minimizing spoilers.  Its symbolism is genius and it is terrible and beautiful at the same time.  It continues to haunt my mind.

Dunst won Best Actress at Cannes, and unlike the film, has been the subject of glowing critical reviews.  After many career misfires like Marie Antoinette, Dunst has finally landed a role that stretches her as an artist and displays the range of professional excellence she is capable of.

Like von Trier himself, I believe this film has been widely misunderstood and misinterpreted.  As a journey into the mind of someone who is clinically depressed, its brilliance rivals Akiva Goldsman's depiction of schizophrenia in A Beautiful Mind, although tellingly, this story is not even remotely as uplifting.  In future years when cinema historians look back on this film, I believe Melancholia will be judged in retrospect as the cinematic masterpiece it is.