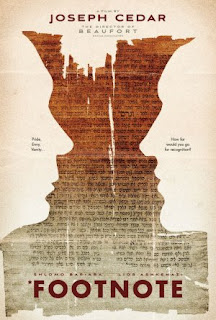 A Battle of Blood

A battle of wits and egos brew as two professors, both from the Hebrew University, struggle for acclaim and recognition for their years of work and passion in the realm of the Talmud.

Eliezer Shkolnik (Shlomo Bar Aba) has made it his life's work to find the differences within the Talmud, as they've been translated and passed down between the generations. He locks himself away for hours on end, headphones on to block out the world, and digs in deep. This isn't just an everyday hobby for him.  The lonesome curmudgeon spent thirty years researching, planting his stake within the academic world as the greatest researcher of the Talmud. The problem is, shortly before his work was to be published, Professor Grossman (Micah Lewensohn) published the same findings, taking away a decade's worth of work and acclaim. On top of it all, Grossman was honored with the Israel Prize for his work, leaving Eliezer with only a small footnote from his mentor.

But that wasn't the worst day of his life. That day came when his son, Uriel Shkolnik (Lior Ashkenazi), was granted entry into the Israel Academy of Sciences and Humanities. Deep within his soul you can feel the bitterness and the rivalry that has been brewing for years. Eliezer takes his studies seriously, while his son has become a bit of a pop-culture icon within the Talmudic research circles. He's charismatic, boisterous and knows a thing or two about the subject. They are polarizing in every aspect of their lives--the way they research, how they present their findings, and how they both receive the accolades bestowed upon them. It is only the Talmud and their blood that they have in common, or so writer-director Joseph Cedar would like you to believe. 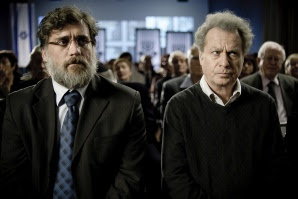 When the tides turn and Eliezer is notified that he's been awarded this year's Israel Prize, the bitter resentment of being overlooked for years quickly vanishes. There is only one issue.  The call was made in error. It wasn't meant for the elder Professor, but instead for the heavily lauded son. Uriel begs Grossman and the rest of the nominating committee to rethink their nomination, as it would break his father's heart.

The film spirals into a world of bitter rivalries and egos in academia. The constant struggle between father and son isn't only between the two professors, but Uriel feels his own son is struggling to secure his own destiny by wasting away in front of the television. The amount of Eliezer that shines through Uriel is subtle at times, but in the end, will he be just like his father? 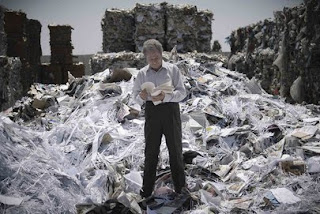 It would be easy for Footnote to fall into heavy levels of dramatic tension. Cedar is able to break the deep levels of emotion with a smattering of comical elements that don't feel out of place. Neither does the constant shift of storytelling devices, including the narrator or the juxtaposed titles on screen that break the film up into several different chapters.

Footnote won the award for the best screenplay at the 2011 Cannes Film Festival and was recently nominated for Best Foreign Language Film at the 2012 Oscars.