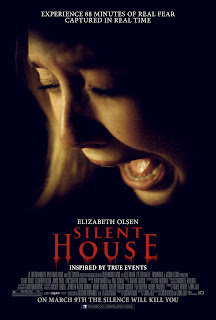 A Single Shot of Terror

The girl in peril story is told from a different point-of-view in Silent House.

What's familiar is the twisted tale of terror about a girl who is alone, stuck and secluded, as some evil force tries to terrorize her. It isn't the story that is the gem within Silent House, but the way co-directors Chris Kentis and Laura Lau (the same team behind the indie thriller Open Water) tell it as a single take. While Hitchcock was limited to the length of film within a magazine, technology now allows the filmmakers to extend shots and find even more clever ways to hide those sneaky little edits.

From the beginning, Kentis and Lau show off their flare in a crane shot of Sarah (Elizabeth Olsen) on the dock at a lake. From there the camera pans down and follows her to meet her father, John (Adam Trese), who has taken her to the old family house to spend the weekend cleaning it up and repairing it with her uncle, Peter (Eric Sheffer Stevens), so they can sell it. The home is no longer useful, and instead of dealing with the non-stop problem of pests and squatters, why not put it up on the market.

After a brief encounter with her former friend, Sophie (Julia Taylor Ross), whom she doesn't even remember, Sarah is left with just her father as Peter drives off into town. Since the house is old, floors creak and other noises come from all different directions. The house is only lit by the lanterns and flashlights, as the power has long been shut off and the windows have been boarded up to keep out the undesirables. 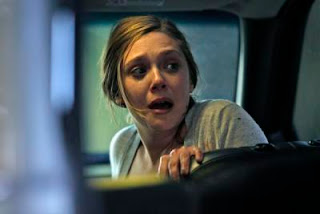 As with all horror films, something happens and suddenly Sarah is separated from her father. The camera work is perfected by allowing you to travel along with her as she creeps around the house, trying to find him. But the tension builds and she senses she is no longer alone. She peaks around a corner, and as the camera goes with her, we are limited only to her viewpoint.

And since the family didn't want anyone getting in, claustrophobia builds as Sarah tries to find her way out of the house and to safety. Not since The Descent have I felt so much tension. The limited amount of light and tight spaces make the big screen feel so small.

Elizabeth Olsen is a star in the making. After her stint in the highly-praised Martha Marcy May Marlene in 2011, Silent House is another showcase for the young actress, who should easily step out of the shadow of her sisters. She must carefully tread through the house, first in a journey to find her father, then just as quickly she must shift gears and convey pure tension and terror without the use of dialogue. She must stay as quiet as possible to avoid detection by her pursuer, as her chest heaves with each labored, silent breath.

While the script is light on story, it is the performance and camera work that will keep the viewer on the edge of their seat. Most of the story is lightly layered throughout the film and only hinted at, leaving the viewer to make their own assumptions. The film loses some of its luster in the final five minutes as the filmmakers try to tie together all the subtle clues previously laid out to the viewers. The problem is, the twist that it tries to take has been seen before, and because of the single-shot conceit, some viewers may leave scratching their heads at what they just saw.