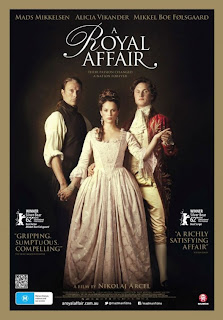 A Scandalous Affair
by Zac Ryan

With a heavy dose of costume drama, A Royal Affair could easily be about today's political climate here in the United States.

When we first meet Caroline Mathilde (Alicia Vikander - soon to be seen in this season's Anna Karenina) she is being whisked away from her home to become the new wife and eventual Queen to her distant cousin in Denmark, Christian VII.  He isn't the most noble of men, but instead, hides behind a bush and is more enthralled with being reunited with his dog than his new bride.  He's a bit of a man-child, a a typical type found in American comedies, but the country and the counsel believes he is a bit insane. The King would rather spend his time bedding countless prostitutes than tending to the issues plaguing eighteenth century Denmark or his bride.

After the King tends to his one duty to the country, having a son, he is off to travel, where he meets the German doctor, Johann Struensee (Mads Mikkelsen).  He quickly becomes the King's closest confidant and personal caretaker, allowing him to slip easily into royal society.  Johann gives Christian the strength to fight against counsel who sees the peasants as second-class citizens, bringing the ideas of the Enlightenment to a country that is still stuck within the Dark Ages.  Struensee notices the King's love for Shakespeare and teaches the King to act in front of his counsel, making sure he knows he is the King and all authority lies in his own decisions. 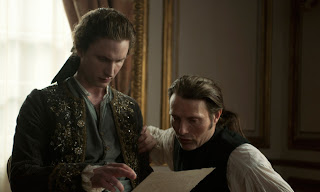 With the power now back within the monarchy, Christian disbands the counsel and seeks to bring equality among the citizens of the country.  Laws are brought forth to clean up the smell that lingers within the country, to stop the savagery of capital punishment, and bring the country into the new ways of the World.  It is one man, along with his new trusted adviser, against the conservative mindset that has plagued Denmark from moving forward.

But while the King is busy bringing forth change, a relationship brews between Johann and Caroline.  It isn't about the lust between the two, but they see beyond the good looks, and connect on a deeper level based on their love for Voltaire and Rousseau.  What starts out of a connection on an intellectual level becomes one of passion.  Caroline is left in the shadows of the King, one she never felt a connection to on any level, to a connection of mind and body.  And when she finds out she is pregnant, Johann pushes Caroline to sleep with the King once again, considering that they haven't shared a bed in almost a year.  But rumors begin to peculate between the ousted counsel and the citizens of the land, who must try to find a way to overthrow Johann using Charles as his puppet, and get the country back to its roots. 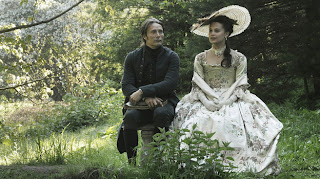 A Royal Affair is superbly directed by Nikolaj Arcel, who co-wrote the script with his long-time partner Rasmus Heisterberg (The Girl with the Dragon Tattoo).  With a run time of over two hours, the film never slows and the drama constantly builds.  While the history is widely known in Denmark, it may be new to many on this side of the pond.  As we sit a country divided among conservatives and liberals, the period drama gives notice that change can be a good thing, not just for the country, but also for the most common of its people.

While Mikkelsen (best known as the villain in Casino Royale) and Vikander are fabulous in their roles, it is Følsgaard who shines on screen.  He perfectly captures the King as man who feels inadequate in his superior position, and easily jumps between bits of power, mainly through his bits of acting in front of the counsel, to his bits of laughter and slight maniacal demeanor.

The film has already won kudos at this year's Berlin Film Festival for Følsgaard's portrayal of the King, the writing by Arcel and Heisterberg, the Audience Award at the AFI Film Festival, and was recently chosen as the Danish entry into the Foreign Oscar category.