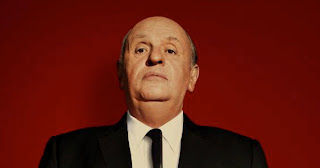 Channeling the Master
by Mark Dispenza

In death, as in life, Alfred Hitchcock remains the master of mystery and suspense. Don't go into Hitchcock expecting that the curtain will be pulled back to reveal the master once and for all. You'll be either disappointed or misled.

Filmmaker Sacha Gervasi's interpretation of Stephen Rebello's acclaimed Alfred Hitchcock and the Making of "Psycho" takes considerable liberty and won't bring you closer to understanding what made Hitchcock tick, but it will give you a delightful opportunity to watch a great actor in a stunning portrayal that effectively captures the great director's sly sense of mischief and single-minded pursuit of perfection in every frame of film.

I'll be the first to admit that I'm far from an authority on Hitchcock's life and methods. I wasn't even one year old when Psycho made millions terrified to step into the shower. My age was early in the single digits when I sat in front of the television and watched Alfred Hitchcock Presents with my parents. The power of the man's personality was such that today I cannot recall much at all of the stories on the program, but I remember in some detail Hitchcock's weekly introductory monologues and how much the man intrigued and amused me.

In classic films such as North by Northwest, Rear Window and Vertigo, Hitchcock kept movie audiences in the palm of his hand, manipulating their perceptions with clever camera angles, lighting and cinematic sleight-of-hand. Gervasi's film gives little insight into Hitchcock's masterful technique and creative process, which was revealed in much greater detail in Rebello's source material.

He chose instead to give us a more conventional love story that brings forth the woman in the shadows - Alma Reville, Hitchcock's wife and a woman of considerable creative talent in her own regard. She is played here by Helen Mirren, a terrific casting choice, especially considering that she is teamed with Anthony Hopkins as Hitchcock. 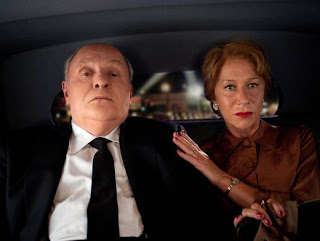 
Hopkins so fully immerses himself in the role that many in the audience at the advance screening I attended had to wait for the credits to see who played Hitchcock. The actor effectively captures every nuance of the great director's character. He transported me back to those early days, allowing me to relive the wonder and joy Hitchcock gave me as a television viewer and movie-goer. Watching Hopkins channel Hitchcock and interact so beautifully with Mirren gave me one of the best times I've had at the movies all year. There is Oscar buzz all over this performance.

This is Gervasi's first time out as a feature film director, and despite the liberties he takes with Hitchcock's story, causing some in the film community to cry foul, he has managed to fully convey the sense of wonder that so captivated Hitchcock's audiences. That focus on character is a strength that was evident in Anvil, Gervasi's acclaimed documentary about the Canadian no-hit rock band that redefines the concept of persistence. 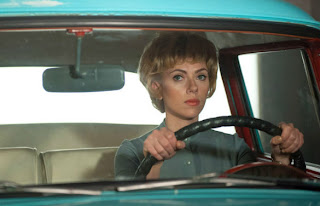 
Gervasi cleans up Hitchcock a bit by making light of his alleged sexual obsession with his leading ladies. Hitchcock even manages to have a professional relationship with his shower victim, actress Janet Leigh, played here by the always watchable Scarlett Johannsson.

Posted by Mark Dispenza at 9:55 AM