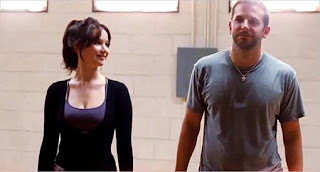 "Meeting cute" has been a staple of romantic comedies for decades...until now. Meet Pat (Bradley Cooper), a bipolar train wreck who was just released prematurely on his mother's recognizance after eight months in an institution, and Tiffany (Jennifer Lawrence), who deals with severe depression following the untimely death of her husband by sleeping with everyone she comes into contact with. Surely this is a match made in hell...except that it isn't.

They meet for the first time at a dinner given for them by Tiffany's sister (Julia Stiles), who is involved in a clandestine plot to set the two up and make Pat forget about his ex-wife, with whom he is obsessed. He had been arrested and institutionalized when he discovered his co-worker in the shower with her, and then beat the hapless man to within an inch of his life. His ex now has a restraining order against him, a fact to which he pays too little heed.

Pat and Tiffany's first conversation of mutual interest is about the meds they've been prescribed and how they reacted to the side effects. From then on things get rocky. As Pat becomes ever more obsessed with reuniting with his ex,Tiffany hatches a plan to get his attention by volunteering to carry a letter to her. In return Pat must become her partner in an unlikely attempt to win an upcoming ballroom dance competition. Just when you think this whole plot can't get any crazier, it does. 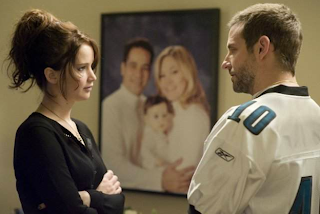 Cooper has proved his worth as a leading man and as a comic actor in films such as The Hangover, but in Silver Linings Playbook, he achieves a depth of character that shows once and for all that he's not just another pretty face. Lawrence (Winter's Bone, The Hunger Games) never fails to astound with her intensity and range, and this film is a case in point. She plays above her age as an older and slightly more mature, if not outright crazy, character and she nails it.

Robert De Niro returns to comedy in top form as Pat's father, who is just as insanely obsessed, but with the Philadelphia Eagles football team. Jacki Weaver continues to add to her resume of recent successes as Pat's mother, who is tirelessly dedicated to restoring order to her home by low-key attempts to tame the restless spirits of the two men she loves. 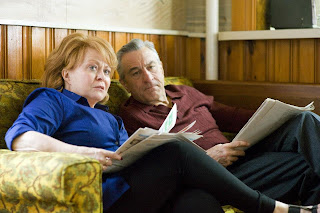 David O. Russell, in his follow-up to The Fighter, scores again with another great story about ordinary people who achieve happiness and their own brand of success against the odds. It is filled with quirky characters who look a lot like the people we know, and who can be just as annoying and just as endearing. The script was adapted by Russell from the novel by Matthew Quick.

Not since Moonstruck, my all-time favorite of the genre, have I experienced a romantic comedy that's so much fun, yet so implausibly real at the same time. I highly recommend this film. It may be the most entertaining movie you will see this year.

Posted by Mark Dispenza at 9:50 AM