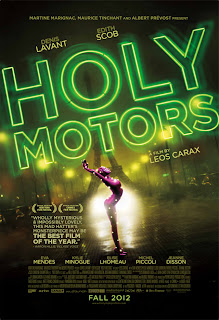 A Cinematic Thrill-Ride
by Zac Ryan

A visually stunning love letter to cinema, Holy Motors may be light on plot, but it delves deep into multiple genres and may have one of the greatest performances of the early twenty-first century.

I recommend that you go into Holy Motors without much knowledge of the story, the characters or the visual candy in store for you.  Coming off of its successful screening in Cannes earlier this year, I was told to avoid anything in the press and any trailers if I wanted to have the ultimate experience.  Before sitting in the darkened multiplex to witness Leos Carax's latest film, I had seen the trailer only once, but little can actually be gleaned from it.  So I leave you here dear reader, if you want to have one of the best film experiences in several years, and admonish you to turn away from the rest of the review and let the mind wander when you actually see the film. 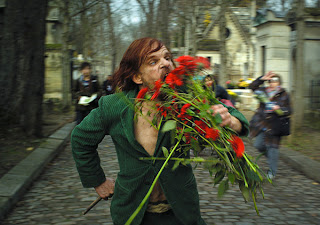 In the opening images of Holy Motors, the director Leos Carax wakes in a room wallpapered to look like a forest and is freed by inserting a key into the wall that is part of his finger.  From there, he looks over a group of theater-goers, watching a flick on the big screen.  Then suddenly, a dog is wandering down the aisles.  Maybe this old dog represents Carax and his old ways of cinema compared to the splashy special effects-laden films currently being churned out by the studios.  Maybe there is another meaning, or maybe the director wants you to dig deeper into the film with multiple viewings to fully grasp his messages.

From the cinema we meet Monsieur Oscar, played by long-time Carax collaborator Denis Lavant, as he leaves his palatial estate and jumps into the back of the waiting stretched limo.  What emerges from the limo after its jaunt across Paris, but a hunchbacked woman, who heads onto the town to beg for change.  This is one of the many characters or "appointments" he will have over the course of a single day. 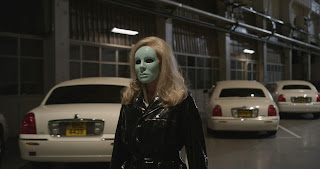 In between each appointment, Oscar sits in the back of the limo, which has been set up as a makeshift changing room.  He transforms easily into each character with a mixture of prosthetics, wigs and acting chops. Neither Oscar, nor Carax, ever explains what the mission is or why he's set upon these "appointments."  Viewers are left to make up their own minds, as Lavant plays eleven different characters over the course of the day.  Not only is he the beggar, but also an emotionally abusive father, a performer in a motion capture session, and a sewer dwelling, flower-eating madman who kidnaps a fashion model (Eva Mendes).  The latter character was previously featured in Carax's segment "Merde" in Tokyo!

With each new vignettes, Carax mixes between genres.  One minute the audience may be laughing at the antics, while in the next segment the film shifts gears and hits a serious moment, all before breaking out in a song as an interlude.  And Lavant flawlessly embodies every character.  It is the type of role actors dream of, but as films often rely heavily on the use of actors against green-screened backdrops, an actor is hardly given the chance to explore multiple facets within the same movie.  Just like Cloud Atlas, Motors wants the viewer to dig in deeper to find the meanings between the connective tissues.  It may not be easy in the first viewing, but as you pull back the layers, you may just be able to see what Carax wanted to share with all of us.