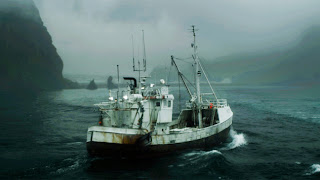 An Unlikely Hero Beats the Odds
by Mark Dispenza

Iceland's Best Foreign Film entry to the 85th Academy Awards is an improbable tale of survival set against a North Atlantic landscape of stark beauty.

In March of 1984, a local fishing vessel set out from Iceland's Westman Islands and never returned. Many hours after the boat sank in the near-freezing North Atlantic, a lone survivor, haggard and almost incoherent, knocked on a door in the village from which the boat had set out. He had swam the distance of several miles in six hours and then walked barefoot for two hours in freezing temperatures over cutting volcanic rock covered with ice and snow - a feat that should have been impossible for any normal human being. 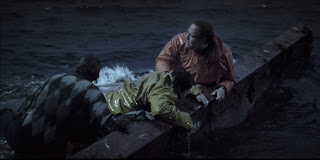 The most amazing thing about Baltasar Kormakur's film is that it is a dramatization based on an actual event. Kormakur is best known to American audiences as director of Contraband, the Mark Wahlberg vehicle that released earlier this year, but he has a track record of outstanding films over the last decade in his native Iceland. His recreation of the sights and sounds on a fishing boat and the Icelandic coast are engrossing in their realism and simple beauty.

Olafur Dan Olafsson plays Gulli, the fisherman who beats the odds to survive in the harshest of conditions. Olafsson effectively conveys Gulli's will to survive primarily through facial expression and conversations with sea gulls during the survival sequences that run through the second act. The latter part of the story is devoted to Gulli's attempts to return to his normal life and escape the public attention his amazing story precipitated. 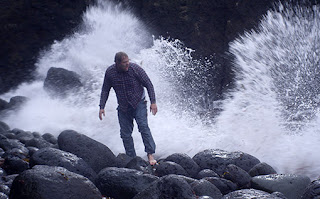 Kormakur fittingly dedicates his film to the fishermen of Iceland. His film is a celebration of the humanity and strength of the people who populate the country's Westman Islands. These are a people who work hard to build a life in a desolate location, afflicted by both frigid weather and the terrible hell unleashed upon them from time to time by the area's active volcano.
Now that The Deep has made the cut for Oscar's Best Foreign Film shortlist, a few of the American distributors who have been hovering around it since Toronto may finally bite. I hope for this because The Deep should be seen on the big screen to gain a full appreciation of the beauty of its cinematography, especially the underwater scenes. If you don't get to see it in that format, and you have to reserve it on Netflix or Amazon, at least watch it on a big screen TV.

Posted by Mark Dispenza at 1:36 PM