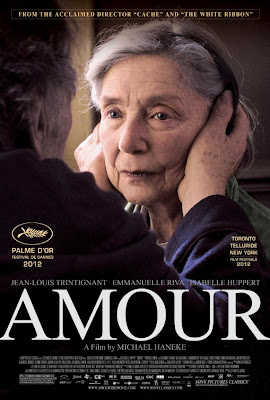 Love and Death
by Zac Ryan


A heartbreaking and unflinching look into the lives of an elderly couple, Michael Haneke's Amour barely breaks from the confines of a Parisian home, as Anne slowly deteriorates from an illness that cannot be contained or helped. Sure, it may not sound like the type of film to bring holiday cheer, but the love that the two leads share as their lives crumble around them is an experience to be cherished.

The opening is stark and dark, like a typical Haneke film, filled with bleak undertones. When the cops arrive at a home, the stench quickly hits them. As they work their way through the rooms and open windows, they find a door that has been sealed off with tape, hiding a death.. Once inside they find the decaying body of a woman, dead for who knows how long, dressed in her Sunday best and adorned with the care usually given by a mortician for a final burial. Before there is a chance to breathe, the film cuts to the title card with little sound or emotion through the title sequence. 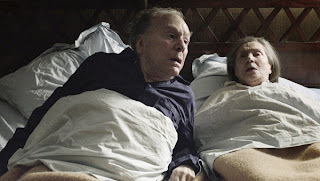 This is where we veer off from the typical horrors that Haneke gave us in recent films like Caché and both versions of Funny Games. We jump back to happier times. A time when Anne (Emmanuelle Riva) and Georges (Jean-Louis Trintignant) sit within a crowd at a concert hall. These two have chemistry together and a lifetime of memories behind their eyes and wrinkled skin.

When they return home, they see that someone has broken in. They both feel uncomfortable and frail. It isn't the break-in, but the illness that quickly follows. The next morning as Georges is talking, Anne stares off into the abyss, possibly lost in the conversation, but we soon realize that Anne had her first stroke, which eventually leaves half of her body paralyzed. Instead of wasting away in the hospital, Anne makes Georges promise her that he'll never take her back to the hospital. She would rather spend the remainder of her time in their home, filled with memories. From here, the film never leaves the home, which is massive in size, and becomes more claustrophobic as the story and Anne's decline unfolds.

Georges becomes the caretaker, caring for his wife of sixty-plus years. There are tender moments when he moves her from her wheelchair to the bed, his constant affection of movements to keep her as limber as possible, and even changing her diaper as she becomes more infantile. These moments are a new type of embrace that take an old couple from passion to compassion in their final days, weeks and months. You can feel the love, and also the frustration that Georges feels, when feeling completely worn down, he slaps his wife. Even then you feel compassionate in his action.

Haneke and cinematographer Darius Khondji keep the shots wide, allowing the art direction to showcase the life once lived by the two. The photos clue the viewer to the passion and abundance the couple once shared, and the memories won't be forgotten. Ultimately it is a showcase for two living legends of the French New Wave that doesn't glamorize or dwell in the mundane. There is no way to beat Anne's affliction and they've both succumbed to her fate. It is a beautiful portrait, although bleak and a chore to get through, and it is the easy frontrunner of the films recently announced for the best Foreign Film in this year's Oscar race. 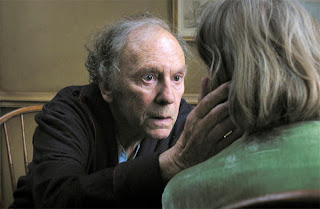 When Hollywood turns it's back on those who are AARP-eligible, Haneke allows his performers to fully embrace the demise of life and that of a great career. Riva should easily be a nominee for the Best Actress Oscar for her complete embodiment of a role that centers around slow deterioration with minimal dialogue. The pain in her eyes, the stillness of her lifeless body and the depth of her expression tell us volumes about her character.

And there are little touches throughout, most notably a dove that flies into the open window not once, but twice in the film. To me, the bird symbolizes a life of freedom, able to fly to and fro, and possibly a bit deeper meaning. Doves can represent love and peace, and maybe that is why, in an act of defiance, Georges covers it with his coat, only to free it once again. Then again, maybe I'm looking too deeply into it. But does Haneke ever include something without meaning in his films?

Amour has been justifiably honored by many critics and awards in the festival circuit, including the Palme d'Or at the Cannes Film Festival, Best Foreign Film from the Boston Film Critics, Best Film at the European Film Awards, Best Film from the LA Film Critics Association and countless other awards and nominations.

Posted with Blogsy
Posted by Mark Dispenza at 8:00 AM