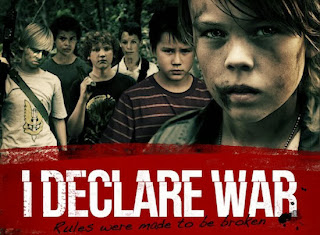 More Than a Game
by Mark Dispenza

The Lord of the Flies meets The Hunger Games as a preteen contest of Capture the Flag devolves into something darker in I Declare War.

Jason Lapeyre and Robert Wilson directed the film from Lapeyre's own script.  The end result is an effective story based on Lapeyre's typically dark and allegorical social themes, enhanced by Wilson's low-budget action and horror sensibilities.

The story opens in the middle of a preteen war game.  Kwon (Siam Yu) is excited to be on the team led by his best friend, PK (Gage Munroe), a master strategist who has never lost a game of war.  The stakes are higher this time, because for the first time they are up against Quinn (Aidan Gouveia), a general who is PK's equal in the field.

In previous games the kids have followed the established rules to the letter, but the nature of the game changes when Skinner (Michael Friend) launches a coup d'etat against Quinn and takes over the opposing team.  This is more than a game to Skinner. It's personal.  For reasons not fully revealed until the climax, he is engaged in a personal vendetta against PK, and he's going to win this game at all costs. 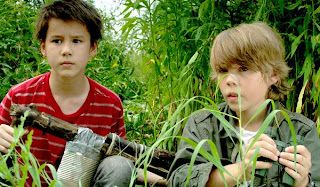 In a bid to lure PK into his trap, he takes Kwon as a prisoner.  The helpless youngster becomes the object of whatever torture Skinner can conceive, as he channels his anger for PK against Kwon.   As Skinner ups the stakes by dispensing with the rules of the game in his obsessive bid to dethrone PK, the rule of law begins to break down among the other members of his team. 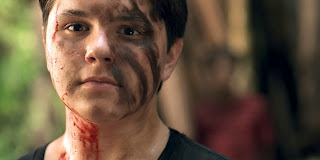 The story is told from a viewpoint of hyperreality.  The characters sometimes behave like children and other times improbably like adults.  PK speaks about military strategy with knowledge far more befitting a West Point cadet or graduate student than a child of 13 years old.

Although the actual weapons of battle are sticks and stones, the audience viewpoint is filtered through the imagination of the kids, who see their weapons as submachine guns and hand grenades.  The result is disconcerting as the kids appear to fire on each other with live ammunition.  The loud explosions and gunfire add to the chaos.

It's an interesting way to make a point.  My mind told me I was watching a real life and death battle before my rational mind kicked in to remind me that it's all make-believe.  It's an innovative technique to underscore the point that this is an allegorical tale, and the kids are really us - adults.

This is a clever film that had me hooked from beginning to end.  With emotions running high and so many separate agendas in the mix, the story continues to take unexpected turns and keeps the suspense taut until the very end.

Each of the actors gets a moment in the spotlight as their personal demons are exposed one-by-one, which makes the film a terrific vehicle for its young actors.  Mackenzie Munro plays Jess, "the girl" who manages to crash the all-boy club in her single-minded pursuit to win Quinn's heart.  She impresses him with her abilities, so that he allows her to play on his team.  Once he is ousted in the coup, Jess assumes a more destructive agenda.  Her secret plan is to avenge Quinn annd impress him simultaneously by undercutting Skinner and taking the flags of both teams by herself.  As she becomes more aware of the sexual tension she arouses in the adolescent boys, she begins to use that as a weapon, too. 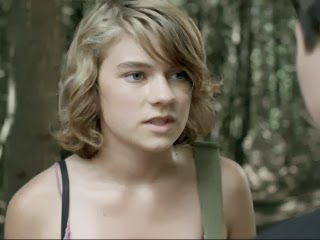 These kids look painfully like us, and it's easy to see in their characters Bashar al-Assad, Vladimir Putin, Barack Obama and especially our coworkers at the office.  The story channels The Lord of the Flies in its pessimistic view of the human race, and does not offer the same hope of redemption found in similarly-themed films, such as The Hunger Games and Battle Royale.

If you like well-told allegorical tales about the human condition, I highly recommend this film.  I found it very thought-provoking, as well as stimulating from a cinematic standpoint.  By the way, if you are not aware of the aforementioned Battle Royale, I highly recommend that you rent it.  It's a controversial Japanese film that was ahead of its time in 2000.  The film was too hot to touch by US theatrical distributors at the time of its release, due to its depiction of kids in lethal combat.  It's interesting that The Hunger Games, which appears to be a retelling of the Japanese story, became a hot property for these same distributors after the novels on which it was based achieved best-seller status.  I guess they don't know their audience as well as they think.

My only disappointment with I Declare War is the pervasive pessimism of its storyline.  Although there is much truth in it, I prefer to believe that despite our shortcomings, we are better people than the baser instincts that we sometimes allow to consume us.

Unfortunately in this story, the hapless Kwon learns that if you want a true friend, get a dog.

I Declare War is currently in limited theatrical release in the USA, but it's available for VOD at iTunes, Amazon Instant Video, Vudu and VHX.