A New Evil Gets the Horror Treatment 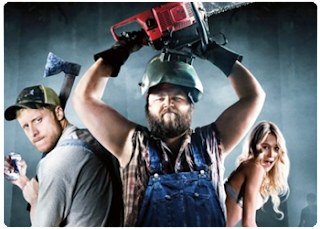 In Tucker & Dale vs Evil writer/director Eli Craig flips the backwoods horror film on its head, playing against the tropes that have plagued the genre for far too long.
Just like with many horror films, a bunch of beautiful and sexy college co-eds are on their way to a weekend of camping in the woods. As they trek along the winding road the first big scare to our campers is that they are out of beer. They all scream, but at least it will be an easy fix. As they stop at the last gas station for miles, the annoying college kids stock up on beer and other libations.
Before they can set off and arrive at their destination, Dale (Tyler Labine) sees and is instantly smitten by the beautiful Allison (Katrina Bowden). Tucker (Alan Tudyk) persuades Dale to go up and talk to her. His self-esteem may be low, but he's a lovable guy. Dale waddles his way up to the group, scythe in hand, and barely mumbles his words of passion.
This is just the beginning of a string of misunderstandings by the "evil" college kids. With stereotypes and preconceived notions of hillbillies, they never give Tucker & Dale the benefit of the doubt. As they drink and partake in other illegal substances, Allison is "saved"' by Tucker & Dale, but with a slanted view on our heroes, the college co-eds led by Chad (Jesse Moss), go on a quest to save their friend.

From here on the movie stretches a single joke through the remainder of the film. As each of the campers accidentally off themselves in ever increasing over-the-top situations, Tucker and Dale feel they must protect themselves. They see the kids on a suicide pact and must protect the lovable Allison from her friends, who want her dead.
Any fan of the slasher genre should be able to appreciate first-time director Eli Craig, who does a great job of blocking shots to play off the notion of misunderstanding between Tucker and Dale and their evil counterparts. The film plays heavily on the tropes fans have grown to love and eventually bore of. And since you can't help but love the two leads, you have no problem cheering them on as they avoid the evil college co-eds.
Tucker & Dale vs Evil is currently playing in limited release and can be viewed on many VOD platforms.