The Ties that Bind 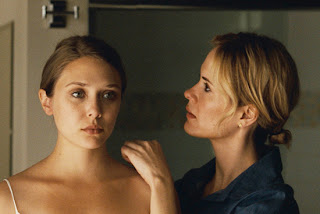 A young woman suffers the chilling aftermath of life as a member of an abusive sociopath's communal family in Martha Marcy May Marlene.
The film opens with a young woman's escape from a communal farm in an undisclosed backwoods location in upstate New York.  Known to her real family as Martha (Elizabeth Olsen), and to members of the commune as Marcy May, she is frantic to get away and calls her sister, Lucy (Sarah Paulson), to pick her up.  With their parents now dead, Lucy is Martha's only surviving family member.  Lucy has not heard from Martha in the two years since she ran off and disappeared without further contact.
Happy to have her back, Lucy and her husband, Ted (Hugh Dancy), take Martha into their home.  At first they are puzzled by her weird habits and strange way of speaking, but as she becomes increasingly paranoid and violent, they fear that she is becoming a danger to herself and everyone around her.
The scenes of Martha's acclimation to normal life with Lucy and Ted are broken up with flashbacks to Martha's life on the commune as Marcy May.  At first she is happy to find herself in a new family headed by charismatic leader, Patrick (John Hawkes), but Patrick's love comes with a price.  He demands complete obedience to a code of his making, and of course, primarily to his benefit, and he is able to rationalize and justify every act of abuse and violence he commits. Things come to a head when Martha becomes party to a terrible crime, leading to her break with Patrick and frantic early morning escape. 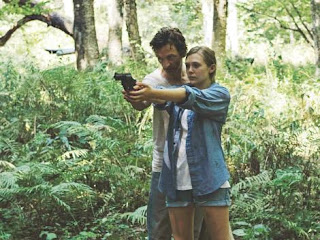 John Hawkes & Elizabeth Olsen
But has Martha really escaped?  She is deteriorating psychologically and imagines (or does she?) that members of Patrick's deranged family are watching her, ready to reclaim her at any moment.
Writer-director Sean Durkin won Best Director at Sundance for this film, an impressive feat given that it's his first feature.  There is already Oscar buzz surrounding Durkin and star, Olsen, who effectively embodies the emotional complexity and deterioration of her character in a subtle and effective performance.  John Hawkes, who excels at playing complex characters who defy easy stereotype, makes Patrick both appealing and chilling.
This is a complex psychological thriller, with a number of ambiguous story elements left to the interpretation of the audience.  That certainly won't make it attractive to the masses of the movie-going public, but if you like this kind of mind-bending, thought-provoking story, you're going to have a great time wrapping your brain around this one.