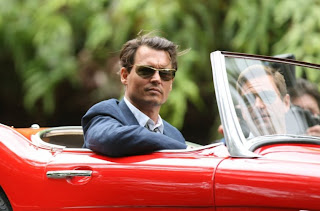 Hunter S. Thompson's first novel is brought to the screen in an entertaining gonzo-lite story that chronicles a writer's journey from alcoholic slacker to socially-conscious crusader.  .Although written early in his career, following a wealth of nonfiction output, Thompson's novel was not actually published until 1998.
Johnny Depp, who plays protagonist Kemp in the film, has been interested in bringing this story to the screen since he played Thompson himself in Fear and Loathing in Las Vegas.  At one time "Fear" co-star, Benicio Del Toro, was even attached to direct.  After many false starts, Depp finally succeeded with writer-director Bruce Robinson at the helm.  Robinson, who is best known as writer of 1984's The Killing Fields, had not directed a film since 1992.
Although the film is opening with some positive audience response, its reception from critics has been lukewarm.  Don't worry about it.  This is not Oscar material and certainly not a highlight of Depp's acting career, but it is an entertaining film filled with beautiful location scenery, a Mad Men-era setting, and great character actors doing what they do best.  The stellar cast includes Aaron Eckhart, Michael Rispoli, Amber Heard, Richard Jenkins (with toupee) and Giovanni Ribisi.  Fans of Thompson and Depp will find the film particularly delightful. 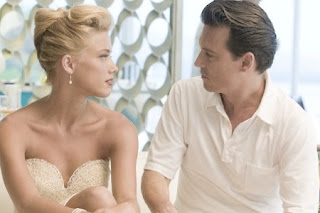 Amber Heard and Johnny Depp
The film opens with Kemp's arrival in Puerto Rico to work for a newspaper on the brink of going under.  It is a match made in heaven, as Kemp's propensity to overindulge in alcohol and parties has left him barely employable.  Neither Kemp, nor publisher Lotterman (Jenkins), have a lot of choice in the matter.
A local real estate promoter (Eckhart) soon latches onto Kemp, believing that his money and Kemp's desperation will be enough to pimp Kemp's writing ability to push a huge multi-million dollar resort development.  Forced to sober up enough to do the job, and smitten by his new employer's girlfriend (Heard), Kemp begins to feel a bit dirty and eventually rebels, threatening to publicly expose the secret deal behind the development.
There are a number of Thompson-like digressions along the way, including Kemp's first-time experiment with LSD, but there is a coherent story here and a lot of very entertaining characters to hold your attention.

Posted by Mark Dispenza at 5:01 PM