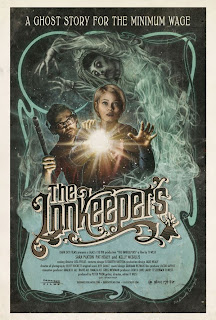 The Final Guest Checks Out
by Zac Sanford

It is the end of an era at the Yankee Pedlar Inn, a small town hotel that has been in business for over 100 years. And over those years the hotel has had its share of guests, including one that may still be roaming the halls, not as a live-in resident or staff member, but as an entity that refuses to leave after the suicide she committed many years ago.

The fact that the hotel may be haunted has always intrigued Luke (Pat Healy), and to jump on the paranormal bandwagon that has taken over reality TV, he’s built a website where he recounts the legend of jilted bride-to-be, Madeline O’Malley. Since this is the last weekend the hotel is to be open, he’s enlisted co-worker Claire (Sara Paxton) to record any occurrences that may arise during the final three days. With the hotel all but empty, they both take turns working the front desk and recording while the other sleeps in one of the empty rooms. There isn’t time drive to and from work when there’s only a little time to find and exploit the spiritual medium.

Pat Healy and Sara Paxton
It isn’t until Leanne Rease-Jones (Kelly McGillis), a former actress-turned-spiritualist, checks in for a psychic convention nearby, that things start to stir in the night. The sweet-natured Claire is enamored by her as the most famous person she’s ever met, but Leanne is bitter and feels something isn’t right in this historic building. After her convention she has a heart-to-heart with Claire, warning her that sometimes things are best left alone. But Claire doesn’t head her warning and continues to try to make a connection.

The film doesn’t fall into the typical pratfall of jump scares every ten to fifteen minutes to keep the audience intrigued. Director/writer/editor Ti West (The House of the Devil) takes his time building up to his explosive third act. You actually get a chance to know spunky Claire and bitter Luke. They have such a wonderful rapport, partially in Luke’s infatuation for Claire that has a zero percent chance to be returned. They are two close friends that are able to spend the mundane hours of the flailing business just talking and still find a way to have a good time.

And when the stuff starts to hit the fan, you’ll care. You want to see them succeed and survive to the final frame of the film when the credits roll. Sure they don’t know what the future will hold for them as they hit the unemployment line, but they may just be able to get through life… if they can only survive. 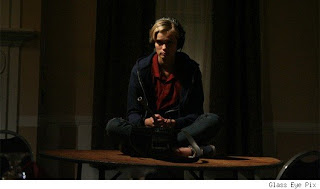 But West isn’t alone. Once again he re-teams with DP Eliot Rockett, who perfectly keeps his camera aimed not on what the characters see, but instead on the characters themselves. Sound Designer Graham Reznick balances the perfect mix of loud scares with pure silence to build tension, while Jeff Grace’s score pays homage to Bernard Herman’s days with Hitchcock.
The Innkeepers is currently available on VOD through most platforms and will have a limited theatrical release on February 03, 2012.
Posted by Zoey Rose at 6:00 AM