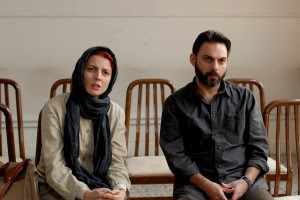 Deception and Lies
by Zac Sanford

An acclaimed new film takes on the conflict between new and old as Iranians struggle to cope with the pressures of modern society.  Director Asghar Farhadi’s multilayered drama delves into the gender inequalities, religious beliefs and class differences that pit two Iranian families against one another in A Separation.

The five-minute single static shot of Nadir (Peyman Maadi) and Simin (Leila Hatami) that opens the film perfectly sets the mood. They both talk directly into the camera as they expound their reasoning for why they are currently at this point in their relationship.
Simin wants to move out of Iran to provide a better future for their daughter. Nadir needs to stay within the country to take care of his ailing father, who has been struck down by Alzheimer’s Disease. The unseen magistrate asks Simin if Nadir has ever hit her, and the only reply she can give is that “he is a good man”. In a country like the United States, it is easy to claim irreconcilable differences, but in a country like Iran, usually the male gets the final say.
Simin ends up moving out of their home and back with her family, leaving her husband to take care of their daughter, Termeh (Sarina Farhadi), during the temporary separation. Since Nadir works during the day, this leaves no one to take care of his father, so he hires Razieh (Sareh Bayat), a female caretaker. Even though she must travel two hours each way to the job, her husband Hodjat (Shahab Hosseini) has fallen on hard times and hasn’t worked in some time, so she accepts the job without telling him. 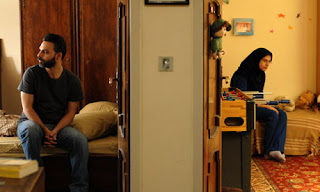 After her first day, Razieh confesses to Nadir she must quit and asks him to hire her husband, but not to tell him she was the previous caregiver. You see, Razieh is deeply religious and even resorted to calling a hotline to make sure it was okay to wash an elderly man who wasn’t her husband. But the following day, Razieh shows up to continue working. She says her husband wasn’t able to make it, lying to cover the facts of why her husband didn’t show that day.
Things quickly escalate when Nadir comes home one day to find his father tied to the bed, presumably dead (but really just unconscious) and Razieh is nowhere to be found. When Razieh returns, she is confronted by Nadir for what she had done to his father. She pleads that she had to go out for a moment and she didn’t want him to get hurt, considering he wandered out the previous day. Nadir wants this woman out of his house and forcefully removes her, creating problems that will further complicate the second half of the movie.
I could go into the story deeper and what happens from there, but I think there’s a point where it is best to stop discussing the story and leave something new to the viewer. The story takes a major turn when Nadir throws Razieh out the door, and it will take many other twists throughout the next sixty-plus minutes. The story delves into deeper levels of classism, sexism and religion, with each of the four characters having to face their own battles. 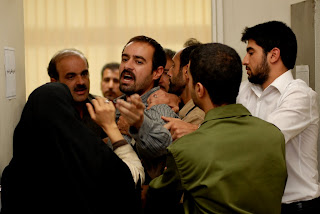 Everyone has a level of deception and secrets that they hold back. It is a film that is perfect in the cinematography, leaving select discussions and scenes just out of the camera's lens or as things heard through a door. Hopefully in the end, you as the viewer will question some of the morality that is placed front and center, as everyone is looking out for their own well-being.
The film is near perfect from beginning to end. Currently it is nominated for best foreign film at the Golden Globes and is Iran’s entry in the Oscar’s Foreign Language category. Previously it won the top honors at the Berlin International Film Festival for best feature, and both lead actors were honored for their work.