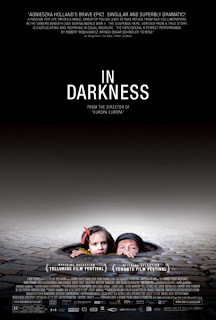 The Holocaust is a time in history that has been covered in such great detail where every Oscar season there is at least one film in the running detailing the grave subject matter. 2012 will be no different as Poland’s official entry In Darkness is nominated for a best Foreign Language Oscar. Like Schindler’s List and The Pianist, Darkness tackles a true-life story of a man who must work against the Nazi regime to help save the lives of a select few.

Leopold “Poldek” Socha (Robert Wieckiewicz), has been using the underground sewers he works in to hide goods he’s been able to loot from the abandoned houses in the ghetto of Lvov, Poland. While stashing the latest loot, he comes across a group of men that have dug out a hole from their home into the vast underground. Poldek decides to let them hide out, not because he is a man with a solid heart, but for the hefty weekly sum he can take in by keeping them hidden. Plus, once he feels he’s bled them dry, he can turn them into the Nazi forces for a handsome reward. 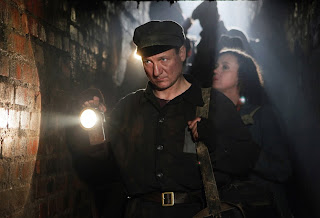 When the war hits its feverish pitch, Ignacy Chiger (Herbert Knaup), his family, Mundek Margulies (Benno Fürmann), and several other Jews take cover within the swampy underbelly of the city. The group instantly clashes as there is little in common except for their will to survive. Chiger is rich and refuses to speak in Yiddish, but ultimately is the one who is responsible for saving those who have come with him. Yanek Grossmann (Marcin Bosak) is the least humane of the bunch, deciding to forgo a future with his wife and kids, but instead to spend the time with his mistress.

As the war continues on, the group slowly begins to fracture. Above ground, Poldek must battle the ever increasing chances of being caught. Not only is his own life in danger, but he is also putting his wife Wanda (Kinga Preis) and daughter at risk. She too easily flip-flops between chastising her husband for not being compassionate enough, to touting he should stop doing the right thing for the safety of his family. 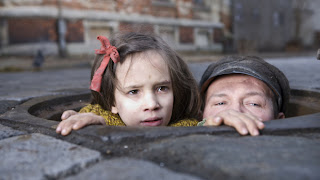 Director Agnieszka Holland knows the material well. Two of her previous works, Europa Europa and Angry Harvest have tackled the Holocaust in such detail allowing her to go deeper into the world and characters for In Darkness. With the help of her cinematographer Jolanta Dylewska, the contrasts between the two worlds are staggering. Just as your eyes are becoming accustomed to the underground darkness with its lack of light, the story shifts to the bright light of Poldek’s life above ground, leaving the viewer as uncomfortable as the characters below the surface.

In Darkness was adapted from the non-fiction book “In the Sewers of Lvov” by Robert Marshall and tells an often overlooked bit of history of the Holocaust. One of the survivors, Krystyna Chiger also has a novel detailing her time in the sewers of Lvov called The Girl in the Green Sweater.

In Darkness is currently in limited release and may expand outside major cities if it is successful in its nomination for the Best Foreign Language Oscar.