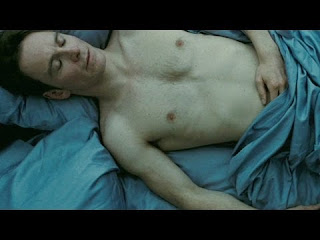 Wanting and Not Having
by Mark Dispenza

Billed as a film about sex addiction, Shame is much more about desire and alienation in modern American society.  Protagonist Brandon Sullivan, played to perfection by Michael Fassbender, has a powerful need to connect with other human beings, but his phobia of intimacy leads him to manifest his desire in the form of anonymous sex.

When Brandon actually engages in sex with a real human being, it is anonymous--a series of one-nighters after a night of clubbing and back alley encounters.  After a coworker to whom he is attracted (Nicole Beharie) actually gives him a shot at real human intimacy, he is unable to perform and quickly loses her.

Michael Fassbender and Nicole Beharie
Brandon's routine of casual sex is disrupted when his sister, Sissy (Carey Mulligan), comes to town and crashes at his place for an extended period.  She is just as messed up as he is and takes him from living on the edge to pitching over it in short order.  Even though they are family, they find it as difficult to connect with one another as they do with others.

Brandon resents the emotional baggage Sissy comes with and wants to get rid of her as soon as possible, but Sissy pushes to connect with him even harder.  She tries to get through to him and astutely observes, "We're not bad people.  We just come from a bad place." 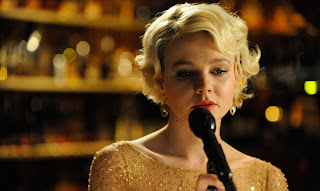 Carey Mulligan
This is filmmaker Steve McQueen's second feature and reunites him with Fassbender, who was also lead actor in his first feature, Hunger, about the 1981 prison hunger strike of Irish Republican, Bobby Sands.  McQueen has already earned a solid reputation for his adroit handling of challenging stories and is coming into his own as a filmmaker of note.

Fassbender has been the subject of multiple Best Actor nominations for his role in Shame this season, and they are well-deserved.  The actor has a gift for conveying the complex emotions underlying the characters he plays, often with hardly a word of dialogue spoken.

Shame is one of the most unique and interesting films to emerge this past year, and it is well worth a look.