This is the second of a multi-part series covering the 2012 Santa Barbara International Film Festival.

It’s your big wedding day and you’ve lost the two rings, so what do you do? If you’re Adrian Meier (Daniel Hendler), you stall in every which way you can. But this day has been planned down to the finest details. The wedding will take place, followed by the dances, then speeches, then the cake, then more dancing, with every minute of the day tied up with one event or another. So to give himself a little more time, Adrian sends the Priest and the Rabbi in the wrong direction.

Sound a little absurd? Well it is, but in a fun and light way. Director Ariel Winograd keeps the tone light and allows the worst fears of many couples big day to come front and center. As the hours tick away and the bride (Natalia Oreiro) believes her husband-to-be may have cold feet, Adrian must do whatever he can to find the rings before the future of his love life explodes.

While preparing to shoot his documentary on choreographer Philippina “Pina” Bausch, production was halted when the teacher of modern dance suddenly passed away. To pay homage to their mentor, the dancers of the Tanztheater Wuppertal pushed for the film to be completed.

The documentary is a beautiful mix of dance numbers and talking heads. Well not the normal talking heads, instead Wim Wenders lets his camera focus on the dancer’s face as a voiceover recounts countless stories of the woman known only as Pina. The use of 3D shines, especially in the segment for Café Mueller, a basic theater stage layered with chairs as multiple dancers have to weave between them.

While the documentary was full of wonderfully choreographed numbers, none of the participants delved deep enough into their passion for dance, nor talked about the passion of the documentary’s subject in too deep of detail. I wanted to know a little more on what made these dancers tick and what drove them to be part of Pina’s dance company. 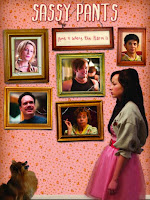 As a fan of the MTV show Awkward, this film sat pretty high on my priority list for the film festival. A quirky coming-of-age story about Bethany Pruitt (Ashley Rickards) who is the valedictorian of her high school, not because of her brains or wit, but because she is home schooled by her over protective and over bearing mother (Anna Gunn). To escape her mundane and overly pink existence, she escapes to what she hopes will be greener pastures with her father (Diedrich Bader) and his boyfriend (Haley Joel Osmont), whom she quickly bonds with.

While the film was loaded with laughs, it felt that Bethany was in a different film than the rest of her cast. While she was grounded in reality, everything and everyone around her was heightened to such high levels that she seemed out of place and in a whole different world. Once Bethany finds out about F.A.T.I. (the Fashion Art Technology Institute), she makes it her goal to escape this crazy world and hopefully find some sanity among the others who share her passions. But knowing many others who have landed in the fashion world, I’m sure she’ll feel just as much out of place there as she does in this current existence.

Who would have thought a film about masturbation and the donation of sperm could be so funny and heartwarming at the same time? David Wozniak (Patrick Huard) can’t seem to get his life in order. He’s constantly a disappointment to all those around him. He can’t make deliveries on time for the family run butcher shop and he is always neglecting his girlfriend who is expecting what she believes is his first child. Problem is, to pay his way through his early twenties, David donated many times to the local sperm bank and has just been notified that he may have fathered up to 533 kids. Talk about an extended family!

The movie turns from the absurd to the dramatic when David goes on a quest to track down each of the kids one-by-one. He doesn’t let them know he is the father they are searching for, but instead finds ways to help them out. As the tension grows, he must choose whether to make his identity known or counter sue to protect his identity, especially once the news outlets start raking his name through the mud.

The film has the perfect balance of humor and heart, which was the right combination to take home the audience award at this year’s film festival. The film recently landed domestic distribution and should have a limited release this coming summer.

The case to exonerate the West Memphis Three has been an ongoing legal battle since they were first convicted back in 1994. HBO’s ground-breaking documentary “Paradise Lost” has covered the history of the murders of three kids at Robin Hood Hills, the eventual conviction and the constant battle to try to have the court’s decision over turned. While the series became a little repetitive, West of Memphis compacts the eight year battle into a tight 150 minute run time, covering plenty of new ground, evidence and supporters (Natalie Maines, Johnny Depp, Eddie Vedder, and the film’s producer Peter Jackson).

While the West Memphis Three are able to walk free, the ending of the battle is one that should rile up a lot of people. The film also goes deep into how the justice system is flawed, especially when it pertains to the use of DNA evidence that should have set the WM3 free years ago, but instead, the biggest twist comes in a suspect that the police never even fully investigated. Instead, the local police took the easy way out, blaming those who looked different as a way to try to put faces to the horrendous crime.