The Brooklyn Brothers Beat the Best

Recently dumped by his girlfriend and his two-man band, Alex (writer/director Ryan O’Nan) meets Jim (Michael Weston), an eccentric musician that has the ultimate plan. Dump everything and head west in a beat up car, playing gigs along the way before landing at the Battle of the Bands in San Diego. Jim is an undiscovered musical prodigy and feels Alex is the ultimate band mate. On the way to their first gig they start writing songs together, instantly bonding and connecting on multiple levels. From the first gig, and for the remainder of the trip, road bumps will be felt along the way.

First time writer/director O’Nan keeps the mood light by never delving too deeply into the characters and their bigger issues at hand. Alex’s biggest problems are not expressed through expository dialogue, but instead through the lyrics of his songs. The characters the “Brothers” meet along the way are almost as eccentric as the band, which consists solely of Alex on an acoustic guitar and Jim playing an eclectic mix of childhood toy instruments. Ultimately The Brooklyn Brothers Beat the Best is a light-hearted romp with a wonderful soundtrack.

Bullhead (Rundskop)
While Brooklyn Brothers may have been a light and fun experience, Bullhead lands on the opposite side of the coin. Dark, disturbing and downright uncomfortable to watch at times, it delves deep into the underbelly of the Belgian mafia and the hormone-fed beef industry. Jacky Vanmarsenille (Matthias Schoenaerts) is the Flemish man front-and-center of the film. He’s loaded up on testosterone and has a chip on his shoulder for a tragedy that was inflected upon him as a child. After the murder of a policeman investigating the underground hormone trade, Jacky finally must confront his past as everything starts to crash around him.
Another first time director, Michael R. Roskam has delivered one of the best foreign films of the last couple years. A crime thriller that is light on the crime and heavy on the drama, this film could have easily won the Best Foreign Language Oscar if it weren’t for A Separation also being in the mix.

Dirty Energy
In April of 2010 a drilling rig exploded off the coast of the Gulf of Mexico spilling millions of barrels of oil into the ocean as BP tried to fix the disaster. During the fiasco, lives were lost and many more were put into upheaval as the local fishing industry was impacted and still hasn’t fully recovered.
This documentary covers the lives of those affected by the disaster, the government cover-up and the long-term effects to the local environment on a more global level. While the film is completely one-sided, the filmmaker goes deep into his research to give a compelling argument to deliver his thesis. 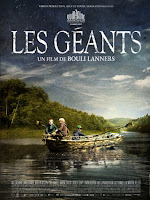 The Giants (Les Geants)
With age comes knowledge, so when two brothers are forced to make life-altering decisions, they are apt to make one poor decision after one another. Danny and Zak are those two brothers, both left to survive on their own at their late grandfather’s house while their parents are abroad for the summer. When the cash supply runs short and there is no other adult to turn to, they rent out their house to the local drug dealer.
A bit juvenile at times, the performances of the three young actors carry the film more than anything else. As the stakes grow, you hope the tides will turn and send the kids back onto the right path. But will the kids learn from their past mistakes or continue going along the same path until someone older and wiser steps in to save the day?

The Rumble of the Stones (El Rumor de las Piedras)
After surviving a flood that killed her daughter, Delia now struggles to raise her two sons in the slums of Caracas, Venezuela. Years later, the eldest son has turned to a life of violence and gangs, sending Delia on a mission to save as much money to finally get her family out of the slums.
Heavy on the drama, the film slips into a heavy hand of melodrama and never lets go. When you think things can’t get any worse for Delia and her family, something else happens to make the matters worse. While there was a great story to be told about a mother’s struggle to save her family, The Rumble of the Stones feels too much like a movie destined for Lifetime.

Salmon Fishing in the Yemen
When the British Prime Minister’s spokesperson (Kristin Scott Thomas) needs to find a good-will story to fight against the Middle East backlash, she helps orchestrate a Sheik’s plan to bring salmon fishing to Yemen. Fisheries expert Fred Jones (Ewan McGregor) laughs at the idea, spouting off facts on why the plan would never work, but since money is no object, he throws outlandish ideas and figures out to Harriet Chetwode-Talbot (Emily Blunt), the Sheik’s aide.
The Sheik believes anything is possible, as long as you have faith. He’s willing to spend big money to bring his passion to his home country as he feels it creates a bond between man and nature, ultimately benefiting the locals. Simon Beaufoy adapts the inspirational and uplifting story from the best-selling book by Paul Torday.

My review can be found here
Posted by Zoey Rose at 6:00 AM