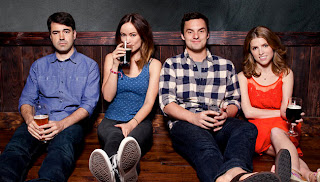 Friendship and Sex
by Mark Dispenza

Drinking Buddies is a very different kind of buddy film.  A genre that goes back to the beginning of cinematic history, the buddy film has been done almost every imaginable way.

We've had buddy cop films and buddy comedies.  We've even had bromances.  Although most have been from the male perspective, recently we've seen women get their due in films like Bridesmaids and The Heat.  But rarely do the sexual lines cross, and when they do we get When Harry Met Sally, which fulfills the accepted wisdom of mainstream society.  Men and women can't really be just friends.

Drinking Buddies is scheduled for theatrical release on August 23 but is currently available for advance screening on VOD from iTunes.  It's a slow weekend for good indie films if you've already seen Fruitvale Station and The Way, Way Back, so I took the advice of an online reviewer and stayed home to download Drinking Buddies. 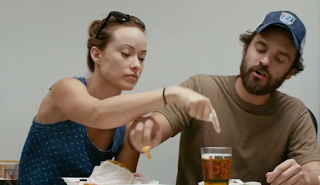 Set at a craft brewery in Chicago, the story follows Kate (Olivia Wilde) and Luke (Jake Johnson), two coworkers who are inseparable, so close they can finish each other's sentences.  They eat lunch together; they tease each other relentlessly; they hang out with coworkers for a brew after work.

Kate is in a relationship with Chris (Ron Livingston). Luke is in the middle of a six-year relationship with Jill (Anna Kendrick), and the two are talking a lot more about marriage these days.  Although it's obvious that Kate and Luke care deeply about one another and are sensitive to the other's emotional states, they have never been intimate in the biblical sense of the term.

When Kate and Chris hit a relationship crisis, the sexual tension between Kate and Luke begins to heat up.  Her emotional state deteriorates, forcing a very concerned Luke to push the boundaries of intimacy to keep her from making stupid decisions, as she begins to take solace in drink and even casual sex with the boss. 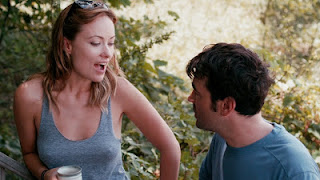 Drinking Buddies is billed as a romantic comedy, although I found it to be light on comedy.  The title of the film suggests slapstick or even raunchy laughs, but you won't find either here.  This is a definitely a fresh take on the buddy film genre, and it explores a subject that hasn't been addressed much at the movies - the concept that men and women can develop close friendships that don't lead to marriage or sexual intimacy.

I found the film to be on the light side in terms of entertainment, with the twist on the genre as the primary reason to recommend it.  It's definitely an actors' film, giving its cast ample opportunity to engage conversationally and emotionally, without the need to play against a green screen.  I feel that the film would have been more enjoyable if the filmmaker, Joe Swanberg, had written more effective dialogue for the cast instead of relying entirely on improvisation.  The lack of subtext in the actors' lines becomes apparent as the story unfolds.  This results in conversation that are just a cut above the uninteresting reality of on-the-nose dialogue, but not interesting enough to challenge the audience. 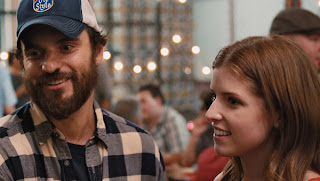 Luke comes across as a man content with his life, and although he's certainly capable of making mistakes or letting his temper get the better of him, he's a level-headed sort who won't get into too much trouble.  On the other hand, it's clear from Kate's very first scene with boyfriend, Chris, that she hasn't found what she wants.  In fact she may be seeking escape from deep-seated emotional issues using alcohol and sex as enablers.  Her friendship with Luke may be the only thing keeping her grounded.

The accepted wisdom of society is that sex will always keep men and women from being true friends.  The apparent appeal of this film to younger reviewers may indicate that expectation is changing.  I've been fortunate to have very close female friends in my life, whom I love dearly and with whom I've never been sexually intimate.

I recognize that, like the friends of my own sex, there are mutual interests and viewpoints that connect us, but there are also differences that would lead to disaster if we crossed the line into the close quarters of day-to-day intimacy.  Sometimes addiction is the problem.  Sometimes we are temperamentally unsuited for prolonged regular contact, and sometimes we share a love of certain things but little interest or even patience with other interests.

The appeal of this film is a hopeful message that our capacity for love can grow to include a whole world beyond our own families and intimate partners.  In other words, love and friendship can be about more than just our own neediness and insecurity.

Posted by Mark Dispenza at 8:50 AM