I Give It a Year 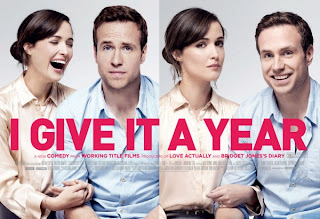 Sometimes It's Better to Wait
by Mark Dispenza

I Give It a Year is a romantic comedy that breaks the mold.  We've all seen it in real life.  A close friend or family member falls madly in love with a partner who is obviously - to everyone else - ill-suited.

It reminds me in tone of my favorite anti-romantic comedy, 500 Days of Summer, although I believe the latter to be the better film.  The humor from writer-director, Dan Mazer (Borat, Bruno) is hit and miss, but when it hits it's both hysterical and original. 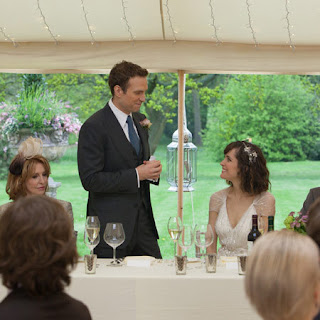 Nat (Rose Byrne) marries Josh (Rafe Spall) after a whirlwind 7-month courtship. None of their friends and family see the match and go as far as to predict the union won't last beyond one year.  As the marriage progresses, and attractive rivals both old and new come into the picture, it becomes harder and harder for the two to remain faithful.

Nat meets Guy (Simon Baker of the TV series, The Mentalist), a new client at her firm, and the attraction is immediately both mutual and powerful.  Much of the comedy from that point on revolves around Nat's weakening resistance to Guy's aggressive romantic overtures, one of which involves the release of white doves in a private dining room at a swanky hotel.  The presence of a ceiling fan leads to unanticipated complications.

Josh is tempted by the return of old girlfriend, Chloe, played by the delightful Anna Faris (the Scary Movie franchise, The House Bunny).  In a classic case of bad timing, the two are forced to confront the lack of closure in their previous relationship and face their unresolved feelings of love. 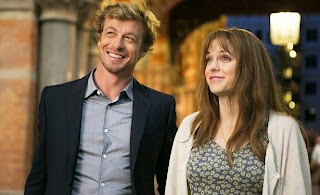 Although I enjoyed actors, Byrne, Baker and Faris in their respective roles, I felt that Spall was miscast.  He is much too handsome and earnest-looking to successfully pull off a character with an inner idiot dying to get out.  It's not that he's a bad actor, it's just that he stretched the suspension of disbelief too many times in that particular role.  The experience was akin to watching Prince William attempt an impression of Jim Carey.

All in all, it's not a bad way to spend an evening if you are a fan of romantic comedy and British humor, with a twist of social farce.  The film is scheduled for a limited theatrical release later this month, but you can download it and watch it now with iTunes.